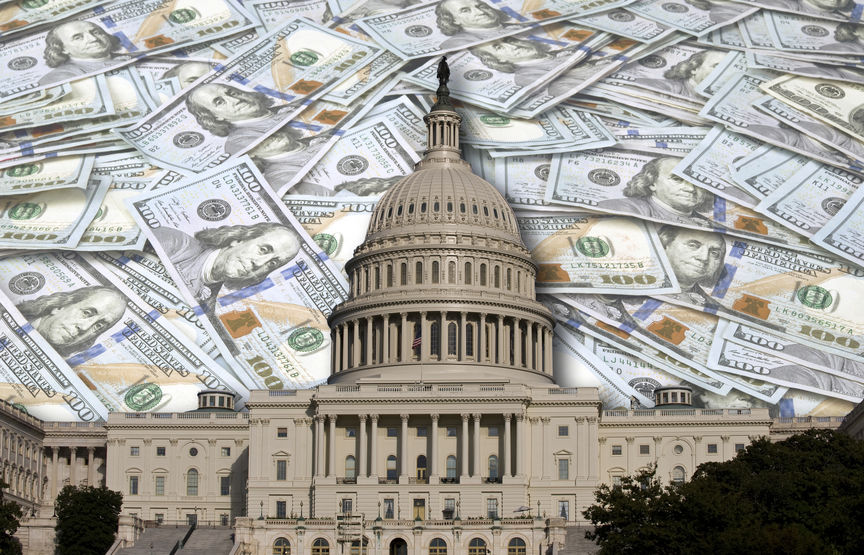 The health of the U.S. economy is vital to our financial wellbeing.

When the economy is strong, employment opportunities grow, small businesses thrive, salaries are higher, and our overall quality of life is better. But when the economy is weak, jobs disappear, incomes decline, and many of us may suffer real hardships.

How does our government try to improve the economy?

When the U.S. economy is contracting, whether due to the normal business cycle, or an unforeseen crisis like a global pandemic, congress looks to implement a fiscal policy that will grow our economy and increase jobs.

Fiscal policy is the use of government spending and taxation to influence the economy.

When the economy is weak, fiscal policy has been to either increase spending, reduce taxes, or both with the objective to inject cash into the economy.

Has our government always tried to influence our economy?

Prior to the Great Depression, the U.S. Government had a hands off approach to the economy.

Laissez-faire economic theory influenced government policy. That changed under the presidency of Franklin Delano Roosevelt (FDR). To help the U.S. get out of the depression, he enacted the New Deal which embraced the economic theory by John Maynard Keys known as Keynesian economics. The belief, and policy, was to increase government spending to boost aggregate demand in the economy that will result in job growth. The idea that the government can influence the economy has been in policy ever since.

There are four components to aggregate demand: consumer spending on goods and services, business investment (plants and equipment, inventory), government spending, and net experts (the difference between exports and imports).

When the government’s goal is to stimulate the economy (increase aggregate demand), the fiscal policy is to increase spending on goods and services such as infrastructure projects, police and fire protection, schools, national defense, etc. The receiving businesses and organizations will in turn increase their spending, including hiring more workers. All levels of government can increase spending to stimulate the economy, federal, state, and municipal.

Government spending that provides money directly to households such as Social security and unemployment benefits also has an effect on aggregate demand by increasing consumer spending.

Many households received an economic impact payment as part of the Coronavirus Aid, Relief and Economic Security (CARES) Act. Payments were sent to individuals whether or not they were directly impacted by the economic shutdown. I know many people who maintained their job wondered why they were getting a payment. There was a broader goal; not just provide relief to affected households, but to increase aggregate demand by putting more cash into the economy.

If increased government spending and lower taxes can stimulate the economy and reduce unemployment, why not just maintain an expansionary fiscal policy? Answer: the risk of inflation and budget deficits.

At some point, too much stimulus will cause the economy to overheat and cause inflation. Inflation will create a new hardship on households. Goods and services will become unaffordable.

When the economy overheats, Congress can enact a contractionary fiscal policy to slow the economy down and curb inflation. They can either decrease spending, increase taxes, or both. This is the opposite of when they are trying to stimulate the economy.

There is another concern of a prolonged policy of increased spending, especially while simultaneously lowering taxes: creating deficits. Just like your household budget, it is unsustainable if you increase your spending while your income remains the same or lowers. Eventually you will create a debt burden that is unmanageable.

Fiscal policy is not the only way the government influences the economy. There is also the Federal Reserve which has a dual mandate to maximize employment and stabilize prices. The Federal Reserve is the central bank of the United States that controls money supply through monetary policy.

The Federal Reserve’s monetary policy decisions are made independently. They do not need approval from Congress or the President.

Sign up for my newsletter to receive future articles